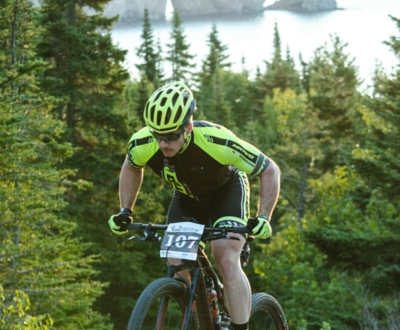 The woods, the mountains, nature, adrenaline, skill and transcendence – this perfect combination makes up one of the most amazing sports – mountain biking.

In 2005, François-Charles began competing in the Quebec-Chaudiere-Appalaches regional circuit. In is in 2010 that he joined the Nativo Concept team and began concentrating events that covered longer distances. He has since been able to participate in a number of major races such as the TransRockies, TransAndes, BC Bike Race, El Reto del Quetzal, SingleTrack 6, Andalucia Bike Race, Breck Epic, Hampshire 100, Whiteface 100, Gaspesia 100 and the legendary Leadville 100 MTB in Colorado.

François-Charles placed 4th in the first Gaspesia 100 Raid and will be back with us on September 3rd in hopes of conquering our main event.