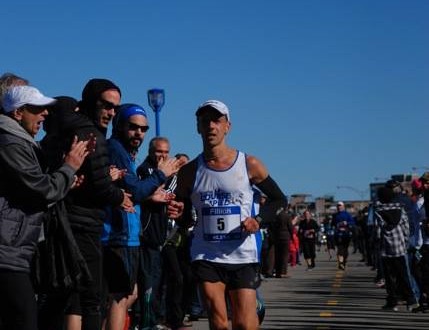 Owner of the Rimouski boutique La Course à Pied, Manu is originally from Rivère-au-Renard in the Gaspésie. Endurance sport enthusiast, he started running at the age of 12. In the beginning it was a means to bridge the time between the Spring and the beginning of mountain biking and the Fall and the beginning of cross country skiing. In 1998 he participated in his first 10 km race which he completed in 34 minutes and 10 seconds. It is after that event that running became an important part of his life.

In 2004, his family grew with the addition of a son who was quickly followed by a second son in 2006. Running allowed him to combine work/family/training more easily than with cross-country skiing or mountain biking which requires more time and effort.

Having participated in competitive track and field earlier in his athletic career, he now focuses on marathons and his training in order to be able to participate in an ultra-trail race on the other side of the Atlantic such as the UTMB or the Diagonale des fous in the near future.

In short, Manu does everything on the run.